When introducing iconic or visual representation of musical ideas to younger students,
you might begin by using a representation of a portion of a song.
Bought Me A Cat
In this musical experience, begin by placing animal pictures and cards (representing the music of the animals in the song) on the board. The animal cards would be in the correct order, the music/icon cards should be mixed up. Make sure you let the students know that they will be figuring out which music card belongs to the animal card as know what they are to listen for is key to their success!

Sing the first verse in its entirety (more than once as needed) and allow time for students to figure out which card "fits" with the cat's "fiddle-i-fee." Place that card next to the cat card and proceed with the other verses/animals. You may find that students are quick to join you in the singing of the song. Wonderful! Once you have learned as many verses as you like and the students are singing with some accuracy, they may be able to apply their understanding of the melodic contour to a new context by playing these phrases (or making up new ones!) on xylophones or keyboards.

You may wish to explore "Same & Different" using Pete Seeger's version of this song. SMITHSONIAN FOLKWAYS 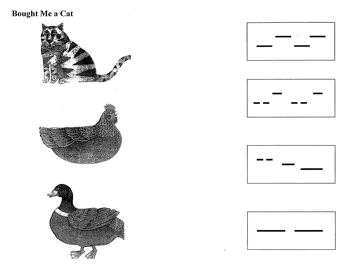 When exploring call and response, you might have students figure out how the two responses are used in "Peep Squirrel." They can begin to learn to learn the song by singing & pointing to the response cards as they simultaneously figure them out, as the teaching sings the entire song. The iconic representation enables students to scrutinize differences between steps and skips in the fast moving second response. Later, students will be able to perform the entire song not only with better pitch accuracy but also with an understanding of the form, melodic contour, and the nature of call and response.

You can find this song and others in these anthologies of African American music.
"Bessie Jones: Put Your Hand on Your Hip and Let Your Backbone Slip"
"Step It Down" by Bessie Jones and Bess Lomax Hawes
"The Long Road to Freedom: An Anthology of Black Music" (Ed. Harry Belafonte)

I'm On My Way
The map for this song was created by Tyron Page, when he was a music student at Oakland University. This song can be found in the Silver Burdett Ginn series, Grade 3. Tyron envisioned students working in pairs, each tracing  one line (call or response) while listening to the music, "joining up" where the music comes together. This holistic introduction to the music would foster understanding as students explore call and response, take turns tracing each line, and take turns singing each line.

Old Abram Brown, choral arr. by Benjamin Britten
numerous recordings available on youtube and iTunes
Using iconic representation is also helpful when young musicians learn to sing in a round. Invite singers to follow the map as they listen to a performance of the choral arrangement. They might also start to listen for interesting that they notice while listening and to be ready to share their ideas with the class. 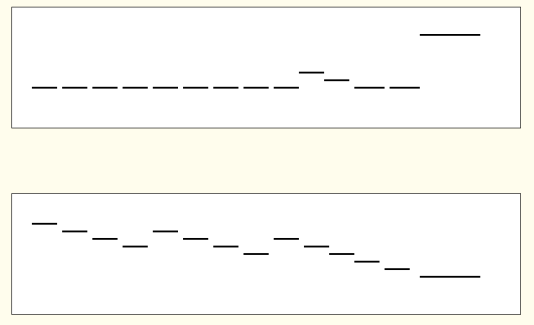 Once students are comfortable with the icons, they can use the map to correctly sing repeated notes, large jumps, and to notice the sequence in the descending pattern. Additional listenings may enable students to figure out the round (how many layers?) and use the map to indicate where the various rounds start and at what point in the song they occur (singing them, of course, and rotating which groups start and which groups come in later). The students can also use the map to figure out the augmented section and to explore how that “works.” Subsequent lessons might include using the published score (with traditional western notation) and finding those places in the score that were so interesting. This becomes a great introduction to score reading, including finding the repeated notes, octave jumps, the descending sequence, and basic rhythmic notation.

Take You Riding in the Car
Representing only the rhythm allows the students to focus on patterns in the rhythm, even though, of course, the song would be sung holistically with rhythm and pitch. Once students have explored the rhythm and have internalized the melody, invite students to move the icons up and down to represent the pitch (up/down, repeated note, step/skip). Using what the students have learned about the song will enable them to play it on xylophones or keyboards extending opportunities for student learning and peer interaction.

Listening to Woody Guthrie’s version of this song is a great way for young learners to consider “same and different” especially in the performance of folk music. ON YOUTUBE

Sound Spiral
Chelsea Otten developed this sound spiral as a way to introduce her students to the idea that music could be represented with graphic lines and shapes. See her lesson plan for using the Sound Spiral with your music students. 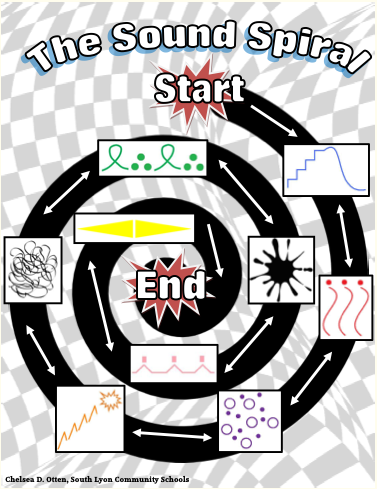